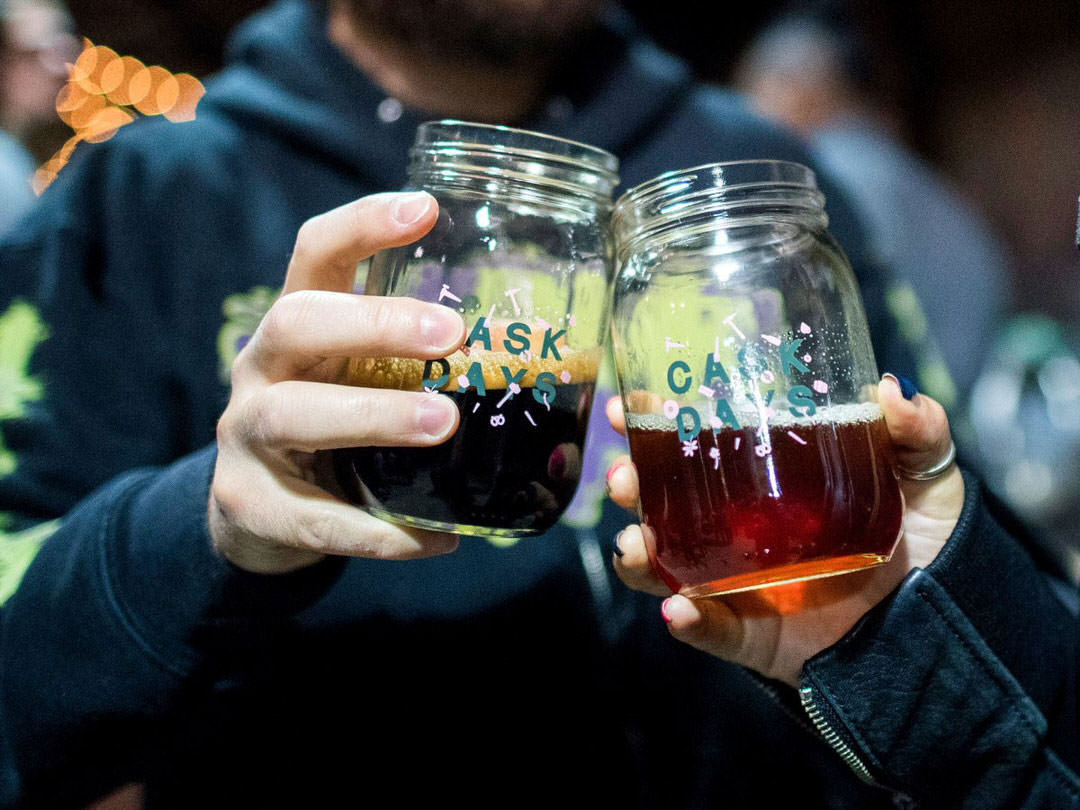 Looking for breweries in Ontario? Jackpot! There’s been an explosion of high quality, small batch, craft beer and cider to match the unique palates of discriminating ale, lager, cider and perry enthusiasts. Awards and accolades are stacking up for these dedicated craft beer makers and brewmasters. Join us for a pint and discover what the brew-ha-ha of Ontario craft breweries is all about.

This east side Hamilton brewery is incredibly beloved. Owner and namesake Brad Clifford had been crafting award-winning home brews for years, but realized his dream of a brick-and-mortar 10,000 sq ft brewing facility and taproom which opened to the public in 2018. The next year, Clifford took home the Gold for the ‘old world’ rich and complex Clifford Porter, Silver for his Brown Porter, and was named Brewery of the Year at the 2019 Canadian Brewing Awards. It also won a Gold in 2020 for its pale ale.

For cider connoisseurs, West Avenue Cider House is 20 minutes north of Hamilton in rural Freelton. Taste their seasonal Legend of the Fall, pick up an award-winning Autumn from the bottle selection, and stay at the onsite cottage overlooking the Somerset Orchards.

While you're here: Marking the season, Muskoka Brewery in Bracebridge brews a fine Harvest Ale while Lake of Bays Brewery in Baysville releases their popular Pumpkin Ale.

Cider drinkers should beeline to Bala’s Muskoka Lakes Farm & Winery for the award-winning Cliff Jump Cranberry Cider. So kick back and stay awhile. Muskoka is brimming with lakeside resorts, cottages and inns to suit every budget and style.

Tapping into the history and culture of Canada’s biggest city for inspiration on their series of stock and specialty beers seems to be the secret of success for Henderson Brewing. The Toronto craft brewer recently took home two Gold medals from the Canadian Brewing Awards for their North American Style Lager, the Ides of January, and for their Traditional German Style, the Ides of February. The taproom is situated in the centre of the brewery, so you can witness the magic happen while you sample a draught or pick up bottles, cans and growlers to go.

Torontonians love craft beer, and neighborhoods are fiercely loyal to their local brewery, alehouse or brewpub. Get acquainted with a host of great craft brews during the annual Cask Days Beer Festival in October. It takes place at the Evergreen Brick Works, which coincidentally is also home to Brickworks Ciderhouse 1904, Toronto’s first cidery.

The Drake Hotel on Queen West and The Broadview in the east end are both trendy digs with rooftop lounges where you can enjoy a craft brew and a killer view.

Old Flame is housed in a historic building dating back to 1874, whose many functions have included horse-drawn carriage manufacturer, a wood and blacksmith shop and a textile factory, before being converted to Port Perry’s favorite brewery in 2013. Free tours regale the full fascinating story of the place. Don’t leave without a couple cans of North American Style Amber Lager, Brunette, another Gold medal winner.

While you're here: There are several not-to-miss craft gems nearby. Just 15 minutes west is Second Wedge Brewing in the town of Uxbridge, with a whimsical beer Garden of Eden made for sipping away a warm afternoon. Pick up handcrafted heritage cider at Slabtown Cider Co. Stop in at the newly relocated Brock Street Brewing, just 25 minutes south in Whitby, for small batch all-natural premium brews and a bite at 12welve Bistro. Satisfy your cider cravings at Archibald’s Orchard & Winery in nearby Bowmanville, and for boutique country accommodations, choose The Hive Bee & Bee in Leskard.

Located in a historic village just 20 minutes from Lake Huron, Cowbell makes craft appreciation an immersive experience. With a state-of-the-art production centre, indoor restaurant with outside patio, merch and entertainment space that’s all certified-accessible, they deliver on all fronts.

While you're here: Find one-of-a-kind, experimental brews at River Road Brewing Co., on the coast of Lake Huron in Bayfield, like the Scurvy Elixir that contains pine needles, or the Oatmeal Stout Breakfast Beer brewed in collaboration with local Shopbike Coffee Roasters. Bad Apple Brewing Co. is another edgy little brewery well worth a visit. Just look for the barn with the apple skull as you drive along the lake from Bayfield to Zurich. East Street Cider Co., just north of Bayfield in Goderich, in Huron County’s first craft cidery. Staying here for the night? The Ashwood Inn in Bayfield is an ideal home base – the lobby bar has a lovely selection of local craft brews on tap.

Nestled around the southern shores of Georgian Bay is one of Ontario’s most fertile apple growing regions, and naturally a destination producing some of the country’s finest cider. In fact, Coffin Ridge took home best-in-class Gold for their Maple Rosemary specialty cider recently at the Great Lakes International Cider and Perry Competition. We also recommend the Lavender Earl Grey Perry.

While you're here: Local cideries creating a buzz include The Collingwood Brewery (won gold for their India Pale Ale), Beaver Valley in Kimberley, Thornbury Village Ciderhouse (hello, rosé cider), Windswept Orchard Cider in Meaford, and new this summer is Spy Cider House and Distillery in The Blue Mountains with their signature Golden Eye. A short drive south to the town of Duntroon you’ll find another can’t miss stop, Duntroon Cyderhouse. Just east, don’t miss Barnstormer Brewing, a unique award-winning brewery, distillery and restaurant in Barrie. The free tours at funky Flying Monkeys Craft Brewery are always a good time. To stay nearby, Blue Mountain Village is a perfect HQ: with suites, chalets or rooms, there are plenty of accommodation options to choose from at Blue Mountain Resort. There’s also the Westin Trillium House for guaranteed comfort.

Not much in this life outshines a fine Cream Ale. Head to Ottawa’s largest craft brewery, located in the Kanata hood for Canada’s winning cream ale. The taproom is open for lunch and samples throughout the week, with tours of the brewery available every Saturday.

While you're here: Another local favourite, Beau’s All-Natural Brewing Co. is an award-winning, employee-owned, certified organic independent brewery open daily for tours and tastings. Stray Dog Brewing Co. in Orléans was recognized as one of the five best new breweries in Canada in 2017, while Kichesippi Beer opened a taproom and retail location in Ottawa’s west end. It’s worth the trek west of downtown to Calabogie Brewing Company for their gold-medal Dry Stout, and to Ugly Apple Cider in Lanark Highlands. This is no ordinary cider. Made from the sweet and wild apples growing on the farm, Ugly Apple has won two medals from the Great Lakes International Cider and Perry Competition.

Word is the concierge at Ottawa’s swanky Le Germain Hotel is a local craft beer expert.

Upper Thames won best ale at 2019 Forks and Barrels Tour, a series of food and drink events throughout the province. It’s a bonus that this micro brewery is in the heart of Oxford County, Ontario’s dairy capital, because a great ale loves a great cheese.

While you're here: From the very drinkable hand-crafted brews at Anderson Craft Ales and the crisp Dry Cider at Toboggan Brewing Company in London, to the refreshingly authentic small batch Railway City Brewing and brand-new Caps Off Brewing in St. Thomas, this area is well worth the pilgrimage. Stay at the gorgeously appointed Chateau La Motte, a palatial 1895 mansion. Complete with a stately circular tower, solarium, luxurious library and formal dining room, you’ll get a distinct whodunit-Clue-vibe. Spoiler alert: you, in the sitting room, nursing a thirst-quenching dry-hopped pale ale.

From Windsor to Timmins and Kingston to Kenora, discover more of Ontario’s fresh and bold breweries and cideries pioneering premium craft beer and cider. Cheers!