The Canadian War Museum is both a museum to the nation’s military history and a place of remembrance for those who served, past and present. It captures the spirit of Canada in all military involvement, with both honesty and respect. The fantastic displays guide you through the twists and turns of history within a building designed to portray hope and regeneration. Many of the displays are interactive and life-size to give you an experience with greater feeling than most museums. Of Canada’s nine national museums, the Canadian War Museum is the soul of us all.

The War Museum is located in the heart of Ottawa on LeBreton Flats. It is within easy reach of the Canadian Museum of History, the Bank of Canada Museum, Parliament Hill and other great national monuments. The entire hub of culture and history is accessible from downtown Ottawa by foot, bicycle, public transport or car (including on-site parking). However, if you really want to make your visit memorable, travel across the glorious Ottawa River and arrive by eco-friendly water taxi.

From the outside, the War Museum has a commanding presence with angular lines to look as if it is rising from the Ottawa River. If you approach from the south-eastern side, you can instantly see some of the items on display in the LeBreton Gallery before you even step inside. The Gallery is an open-storage exhibition space in the building, showcasing many large artifacts from its extensive collection.

For up-to-date information and details on the Canadian War Museum, we recommend you visit their website. For information about other places of interest to explore nearby, keep scrolling to see what Destination Ontario recommends. 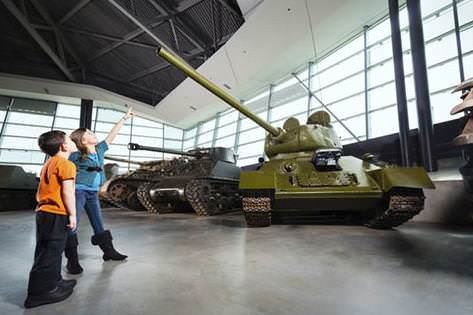 The Canadian War Museum tells the story of Canada’s military history with an extensive collection of artifacts, life-size exhibits, photos, artwork and interactive presentations. It is as creative as it is educational for every age and walk of life.

One of the most inspiring features for the building can be seen from outside. Near the top of the building, you can see the illuminated Morse Code detail made from windows to spell out “Lest We Forget” (in English and French) and “CWM”. It is one of the many creative ways the War Museum projects its message to the visiting guests. Light is also a key feature with a single window in Memorial Hall, designed to illuminate the headstone of the Unknown Soldier each year at 11am on Remembrance Day, November 11.

Inside the War Museum, the stories flow with memories and displays from Canada’s military archives. The Museum covers two expansive levels and includes four general galleries as well as a number of special exhibits. Each of the general galleries covers a set period in time; from pre-contact warfare and colonial wars to the First World War, the Second World War, and finally from the Cold War to present day. Some displays will draw you in with their stories and images (like the teddy bear sent by a young girl to her father serving in World War I) ; other displays will give you an immersive experience of history, such as the life-size trenches. The Museum is regularly updated with historical finds and the latest technology to ensure the utmost respect is given to Canada’s military history and service.

Visitors of every age and background will discover something special at the War Museum. It is a museum built on experience and interaction to ensure Canada’s military history is as much understood as it is respected. There is so much to learn and discover, you will want to return to see more!

The Canadian War Museum is a great place to start your adventures through Ottawa’s history. Located on the historic LeBreton Flats, the War Museum is neighbours with some fascinating monuments and amazing activities.

A short walk down the road from the War Museum is the Canadian Firefighters Memorial. It is built on the site of the Great Ottawa Fire of 1900 and pays homage to all firefighters in Canada. You can’t miss the six metre tall bronze statue of a firefighter as he points your attention to the granite memorial wall with an abstract map of Canada. Both the firefighter and the matching bronze fire pole were cast from recycled brass couplings sent in from fire stations across Canada.

The Firefighter’s Memorial also includes the surrounding landscape. There is a lone pine on the granite island, a symbol of resilience thanks to its high tolerance for heat. The garden also features red flowers and shrubs, with an extra treat in the fall when the maples turn a fiery red. There is plenty of space to wander around and explore while you appreciate the artwork.

For a change of pace, grab your towel and head to the Ottawa Pumphouse. Located next door to the Canadian Firefighters Memorial, the Pumphouse is an urban paddling park and training centre for national and provincial athletes. The created watercourse flows from behind the Firefighters Memorial down to the historic Pooley’s Bridge, Ottawa’s oldest bridge and a beautiful example of stone arch building. Whether you’re eager to jump in the water or simply want to sit back and watch, the Pumphouse can lift your spirits with the show.