At nearly 16,000 square meters, The Factory is Canada’s largest indoor adventure park. With an arcade, trampoline park, indoor ropes course, zip lines, virtual reality gaming, escape room and so much more, there is an activity to suit everyone. And there’s only one rule — have fun.

The Factory is located at 100 Kellogg Lane in London. The building is also host to a variety of restaurants, a distillery, a brewery and other attractions.

The Factory is constantly adding new games and attractions. For up-to-date information and details on The Factory, we recommend you visit their website. For information about other places of interest to explore nearby, keep scrolling to see what Destination Ontario recommends. 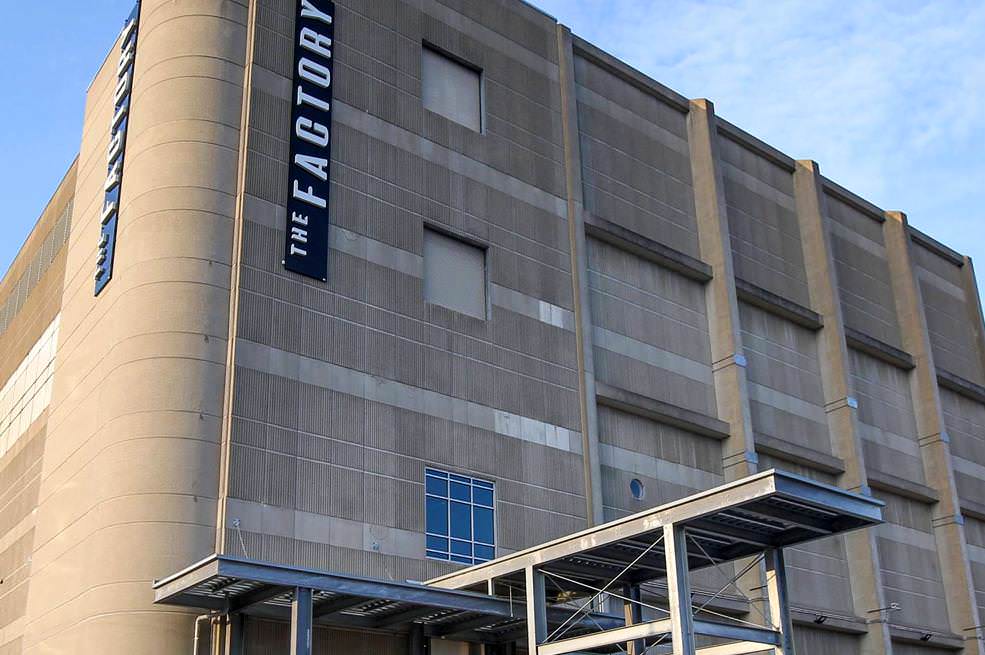 More about The Factory

It’s hard not to be overwhelmed by everything there is to do at The Factory. Not only is The Factory Canada’s largest indoor adventure park, but it is also home to the largest trampolines, escape rooms and arcade in all of North America. Even more impressive, The Factory has the biggest indoor ropes course in the entire world. The sheer amount of attractions makes The Factory a great place to visit when it’s raining or cold outside. It’s also ideal for birthday parties, team building events or hangout days with friends.

The Factory is a great place to bring the whole family, with activities for kids of all ages. The Lil’ Climbers is perfect for kids between the ages of two and twelve, with a mini climbing wall, bouncing bag and an indoor playground of tubes and tunnels. There’s also a small slide and soft toys, which provide infants with safe, fun playtime.

Test your endurance on the Warrior Course. It will challenge you with ladders, nets, log rolls and a giant treadmill, just to name a few obstacles. Race against one of your friends or try to beat your own time, but don’t wear yourself out too quickly — you’ll want to be ready for the course’s 4.5 metre drop into a stunt airbag.

The Factory has several themed escape rooms to choose from, including The Phobia Room, The Enchanted Forest and The Dragon Hatchery. The Phobia Room will test your fears, while The Enchanted Forest will task you with breaking a curse, and The Dragon Hatchery will send you on an epic quest to hatch a red-gold dragon. You can also compete for the best score on one of the park’s 75 arcade games or try to brave The Factory’s Laser Maze. And if you want to experience something truly unique, the Next Level Gaming features hundreds of virtual reality games, including painting, shooting and educational games.

The Factory wouldn’t be The Factory without its 88 rope obstacles and two rope towers, the highest of which begins 23 metres above ground. After reaching the top of one of the towers, you have two options: an exhilarating (but safe) freefall to the ground or a 44-metre-long zipline ride. The latter provides an aerial view of the Trampoline Park, which has a basketball-trampoline combo area, a glow-in-the-dark dodgeball court and stunt performance bags. Head over to the brightly-lit park to test out its trampolines, shoot some hoops or compete in its Meltdown Challenge.

Accessibility is important at The Factory, and it strives to make every attraction as inclusive as possible. It is wheelchair-friendly and provides services for guests who are hearing or visually-impaired. The facility adheres to stringent safety measures and has an emergency medical partner on-site during business hours.

The building itself at 100 Kellogg Lane is a century old former Kellogg's factory, and is also home to several other attractions including The London Children’s Museum, Paradigm Spirits Co. and the Canadian Medical Hall of Fame.

The London Children’s Museum attracts over 80,000 families every year. Devoted to helping children develop their curiosity, the museum features exhibits focused on dinosaurs, the Arctic, science and caves. It also has drop-in programs for kids and adults alike, such as the holiday-themed Santa Meet and Greet.

Paradigm Spirits Co. Distillery produces gin, rum, vodka and whisky. It also offers cocktail classes, which are designed to help you learn delicious recipes that you can easily recreate at home. And if you’re with a group, sign up for one of their tasting events, such as Whiskies Around the World or Tequilas of Jalisco.

The Canadian Hall of Medical Fame is also a fascinating stop. First established in 1994, the charitable organization strives to honour Canadians who have played a part in advancing healthcare or inspiring others toward healthcare careers. Visitors can enjoy its Exhibit Hall, which tells the stories of over 100 Canadian medical heroes and features a Laureate portrait gallery.