Discover Kingston City Hall, one of the finest 19th century architectural wonders in Ontario. Home to the administrative and governing body of the City of Kingston, the Kingston City Hall is a national historic site that occupies a full city block facing a vista of Lake Ontario.

Kingston City Hall is located in downtown Kingston in Ontario. Its location makes it a prime spot to take in the sights of Kingston, explore downtown or simply gaze out at Lake Ontario.

For up-to-date information and details about Kingston City Hall, we recommend that you visit the Kingston City website. To discover points of interest to explore nearby, keep on scrolling to see a list of Destination Ontario’s recommendations. 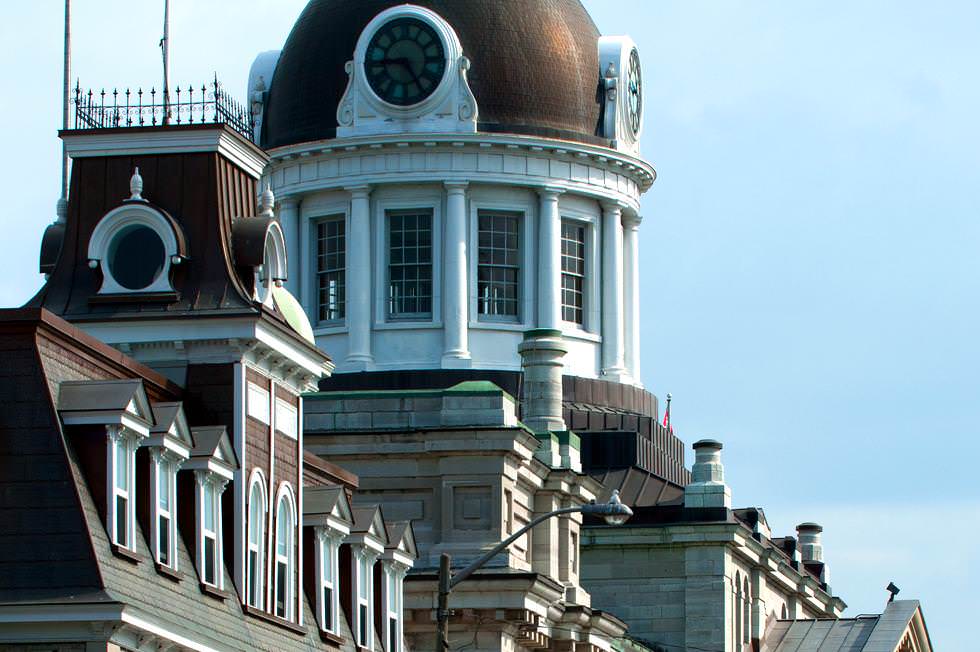 Kingston City Hall is the seat of local government and stands out from nearby establishments and buildings with its distinctive neoclassical style. Its characteristic tholobate and dome make it instantly recognizable as a Kingston landmark, its scale and beauty was designed to reflect its status as the capital of the Province of Canada in 1844.

After a fire in 1840 destroyed much of downtown Kingston, a new municipal building was proposed to be built. Being the capital of the new Province of Canada at the time, a magnificent town hall was in order. The Kingston City Hall started construction in 1843 and was built with limestone in the shape of a “T.” When the seat of government transferred to Montreal in 1844, spaces in Kingston City Hall were rented out to businesses like saloons, dry goods stores, churches, banks, and post offices.

Kingston City Hall is open to the public during Doors Open Ontario, when museums, historical sites and galleries all over Ontario provide free entry to the public. Visitors will be given the chance to observe the neoclassical interiors of Kingston City Hall and learn about its combined functions as a city hall, events center and marketplace.

For the rest of the year, visitors can freely explore the Springer Market Square located behind the Kingston City Hall. It is home to the Kingston Public Market, a seasonal farmers’ market. In operation since 1801, it is open from April until November, on Tuesdays, Thursdays and Saturdays. Lovers of all things vintage will appreciate the antiques market that is open on Sundays, while skaters will enjoy gliding around its skating rink in the winter. Visitors can also take a break and watch a free movie played on a big screen in the square on Thursdays in the summer.

Kingston City Hall is a great starting point for visitors wishing to get to know the waterfront city of Kingston. With a dazzling view of Lake Ontario, Kingston City Hall is also within walking distance of several renowned Kingston attractions. Visitors who love old locomotives will want to take a look at the restored historic train called “Spirit of Sir John A,” located across the street in Confederation Park. Filled with benches and sprawling lawns, Confederation Park is the perfect vantage point to view Lake Ontario after exploring Kingston City Hall and Springer Market Square. Drop by the Visitor Information Centre – the former Kingston and Pembroke Railway Station (K&P Station) in Confederation Park – to pick up a souvenir, or partake in Kingston’s many exciting walking tours such as the Kingston Food and Beer Tours or the Haunted Walk of Kingston.