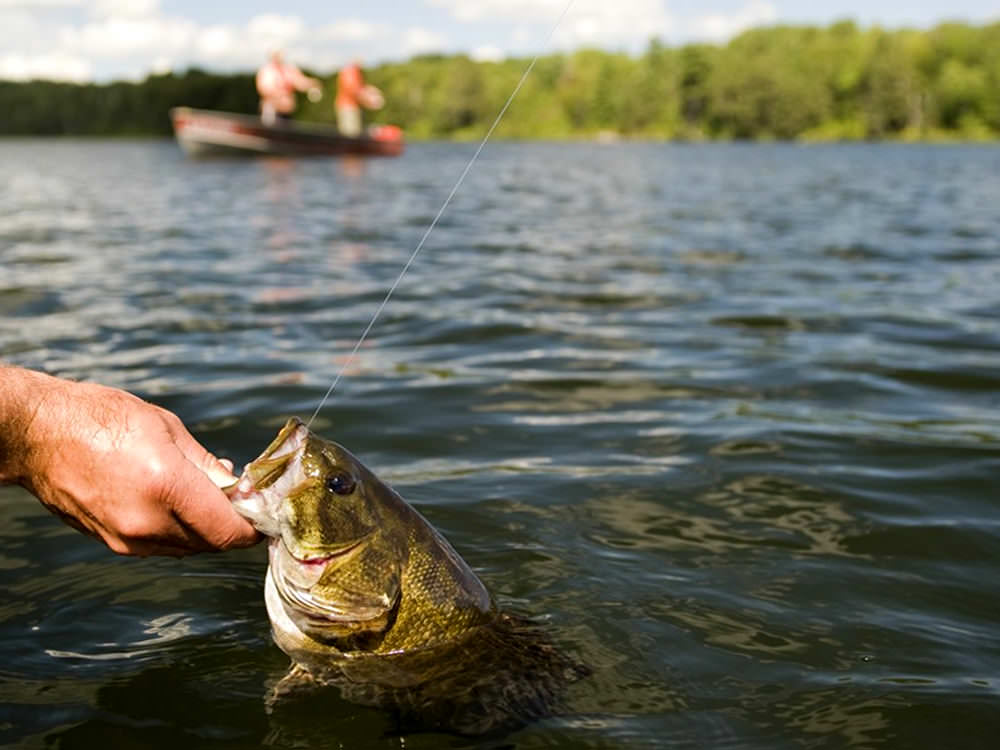 Ontario is big! Bigger than Texas big! And it goes without saying, the fishing is pretty fantastic, thanks to the sheer number of fish, the varied species of fish and the size of Ontario fish. This is why Ontario is the top angling destination in Canada.

(Tomato / Tomaaaahhhhto) Referred to as pickerel by Canadians and walleye by our American friends, this popular fish is some of the best eating in the province and it is prevalent in most water bodies. Walleye is a typical shore lunch food for good reason, it's delicious. Walleyes have giant eyes since they are generally deeper water dwellers. They tend to avoid light, so the very best times to fish are in the morning or evening on cloudy and overcast days or in stained water. The walleye is a predator fish and its big eyes mean excellent vision. Its sharp eyesight in low light conditions allows it to see its prey clearly in the shadows and at night. On bright, sunny days, walleye will venture into deeper waters or lurk in dense vegetation to avoid the light and move around structures to stay in the shadows.

If you’re looking for an adrenaline rush of an angling experience, look no further than one of the biggest kids on Ontario’s block, Northern Pike. One of the most prevalent predator fish in Ontario’s waters, they rule the roost and are all about violent eats. Though not always a favourite as a shore lunch offering, (they are quite boney and difficult to clean) they will readily attack lures, flies and most anything you throw at them with reckless abandon. They are a perfect sport fish for catch and release. Northern pike are aggressive eaters, and being opportunistic feeders, they will eat whenever they can, however for anglers, morning and evening seems to be their hungriest times. They lie in wait, ready to ambush their prey. Pike are precision hunters, so target them along weed edges or defined points of structure and hang on, it will be a wild ride once you hook one of these water wolves.

Bass are the most popular gamefish in North America... and for good reason. They are plentiful, relatively easy to catch, acrobatic and stunningly beautiful, often looking like the tigers of the deep. The best fishing times for bass are early in the morning or late evening. Look deep near rock shoals and weed edges. They will eat most offerings, so cover the water column with topwater offerings all the way to dropshotting in deeper water! Bass are a great fish to experiment with to expand your angling prowess. They are along the Great Lakes watershed, the St. Lawrence River and north of Lake Nipissing.

The Brook Trout: Fury in Beauty

Mother nature was on point when she created the brook trout – arguably the most beautiful fish that swims in Ontario. But don’t let their looks fool you, brook trout are voracious hunters and will eat anything they can fit in their mouths, from larval insects all the way to other fish and even small mammals. Brook Trout are olive green, brown or black with a silvery white belly. They have light markings and spots, some red and some blue, and a mouth that extends past their eyes. They spawn in the fall and “colour up” as the days grow cooler. Blue halos around red spots are normal, but be warned, they do have teeth. In streams, look for brook trout in cooler water, quiet pools between runs of fast water and rapids. Water quality is key for brook trout, as they don’t tolerate heat or pollution. They must have a year-round supply of cold water with plenty of cover from overhanging branches, logs and rocks to thrive and survive.

Musky: Hunting with a Fishing Rod?

If you’re looking for a challenge, pick up a musky rod. Musky, lovingly referred to as the fish of 10,000 casts, is a species you hunt rather than fish for. When caught, musky will shake their massive heads to escape and are known for their strength and their size. Their diet consists of fish, but they also eat crayfish, ducklings, frogs, snakes, mice, muskrats and other small animals. Even small birds will fall prey to this mighty fish. With needle-like teeth and a large mouth, muskies try to take their prey head first, often swallowing them in one gulp. Muskellunge have dark vertical bands on light background, at times spotted or clear green-gold, brown, grey or silver back. They truly are a sight to behold.

Then we have the salmonids. Salmon stocking that was done in the late 1970s in the Great Lakes is still paying off today for anglers. In both lakes and rivers, salmon fishing is hot. Ontario’s extended and (in some cases year-round) seasons make salmon fishing fantastic for non-boating anglers seeking their catch in rivers. Trophy chinook and coho salmon can be found in Lake Ontario and Lake Huron. Lake Superior, the largest of the Great Lakes, has water that is clear, cold and deep, the perfect setting for salmon and the St. Mary’s River Rapids that link Lake Superior to Lake Huron. This is a bucket list trip for fly and gear anglers, as this body of water has chinooks, coho, Atlantics, pinks and steelhead.

The Pot of Gold (at the end of the Rainbow)

Migratory Rainbow Trout (Steelhead) and Resident Rainbows. Steelhead migrate to the ocean and come back to breed in freshwater, whereas Rainbow spend their life in freshwater. For the Steelhead the salt water allows the fish to grow much bigger than their freshwater brethren. In Ontario, “steelhead” are fish that do the same migration but from the great lakes, not salt water. Spring and Fall are great times to target steelhead in many tributaries of the great lakes, but all year long, regulations permitting resident rainbows can be targeted. A 21 or 22 in Rainbow is a trophy, but a Steelhead is not a trophy until it’s at least 36 in.

That’s it, that’s the skinny on Ontario fish. Hope you get a chance to explore them for yourself.