Ingersoll is Ontario’s premier cheese destination and home to the Ingersoll Cheese and Agricultural Museum. With a rich history of cheese making, heritage architecture, fun local festivals, a charming downtown and (did we mention) delicious homemade cheese, Ingersoll is a great getaway for cheese lovers.

Located in Oxford County, approximately 150 km southwest of Toronto and 40 km east of London, Ingersoll is just north of the Highway 401. VIA Rail also provides service to Ingersoll.

For up-to-date information and details on the Ingersoll Cheese and Agricultural Museum, we recommend you visit their website. For information about other places of interest to explore nearby, keep scrolling to see what Destination Ontario recommends. 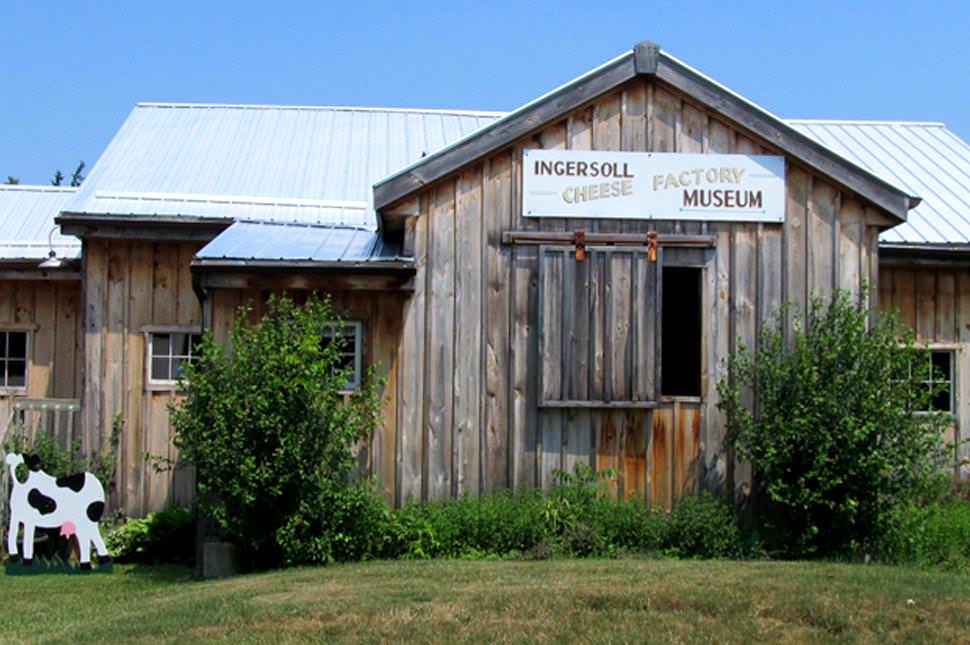 Nestled along the banks of the Thames River, Ingersoll is a unique community. Located in Oxford County, the Dairy Capital of Canada, it has been a dairy and cheese producing hub for decades. Dating back to the mid 1800s, the town was home to Canada’s first cheese factory, and by 1900, almost 100 cheese factories were operating in the area. Of course, today Ingersoll is a key stop along the region’s Oxford County Cheese Trail.

Learn all about the rich cheese making history at the Ingersoll Cheese and Agricultural Museum. Located in Centennial Park the museum is a re-created 19th century cheese factory and barn and features a variety of tools and devices related to dairy farming and cheese production. Learn about the gigantic 3,300 kilogram wheel of cheese that was produced in town to be shown at the Saratoga Springs New York State Fair. Or marvel at a 6 metre long wooden sculpture by master carver Wilson Johnson. The museum is open year-round, with seasonal operating hours. General admission is by donation and special tours can be arranged. Kids are welcome to play in the cheese themed playground outside the museum.

Beyond the museum, explore the town of Ingersoll. Commemorative plaques paying tribute to early cheese factories that are no longer standing can be found throughout town. Visit the Ingersoll Wine Cellar & Cheese Shop on Thames Street South for a fine selection of locally made cheese from Oxford County, as well as an array of cheeses from other parts of Ontario and around the world. Local Dairy is housed in Victoria Street’s historic cheese factory and specializes in authentic Latin American products like Oaxaca, a Mexican cheese, traditional Indian dairy such as paneer and mango lassi, as well as Canadian favourites.

If you’re looking for a place to stay, Elm Hurst Inn and Spa is an elegant, country manor with a full-service spa and fine dining surrounded by gardens and rolling countryside. Staying true to the theme of cheese, the inn is located on the grounds of a former cheese factory. Choose their Oxford Cheese Trail Package which includes a local artisan cheese and cracker tray, as well as wine, chocolate and complimentary breakfast.

In late August, join the residents of Ingersoll at the annual Harvest Festival. Held each year in Centennial Park, the one-day event celebrates local rural and agricultural roots with kid-friendly activities, entertainment and food stalls.

After a day of sampling cheese, you may wish to stretch your legs on a walk. The John Lawson Nature Trail follow the banks of the Thames River for almost 3 km and offers scenic views and wildlife sightings.