Canada's Wonderland is the very definition of ultimate summer family fun. Epic rides, thrilling water parks, all your favourite food options, exciting live shows and themed entertainment areas have given it the distinction of being one of North America's most popular theme parks.

Spanning over 130 hectares, it’s Canada’s largest theme park. Have your pick of 200+ thrilling attractions, including the record-breaking Yukon Striker, the fastest, longest and tallest dive coaster in the world. With over 16 water slides, a lazy river, restaurants, live shows and eight uniquely-themed areas, there's plenty for the whole family to see and do.

Canada's Wonderland is conveniently located off of Rutherford Road and Major Mackenzie Drive via Highway 400. The park is just over 30 km from Toronto.

For up-to-date information and a nifty interactive map, we recommend you visit the Canada’s Wonderland website. For information about other places of interest to explore nearby, keep scrolling to see what Destination Ontario recommends. 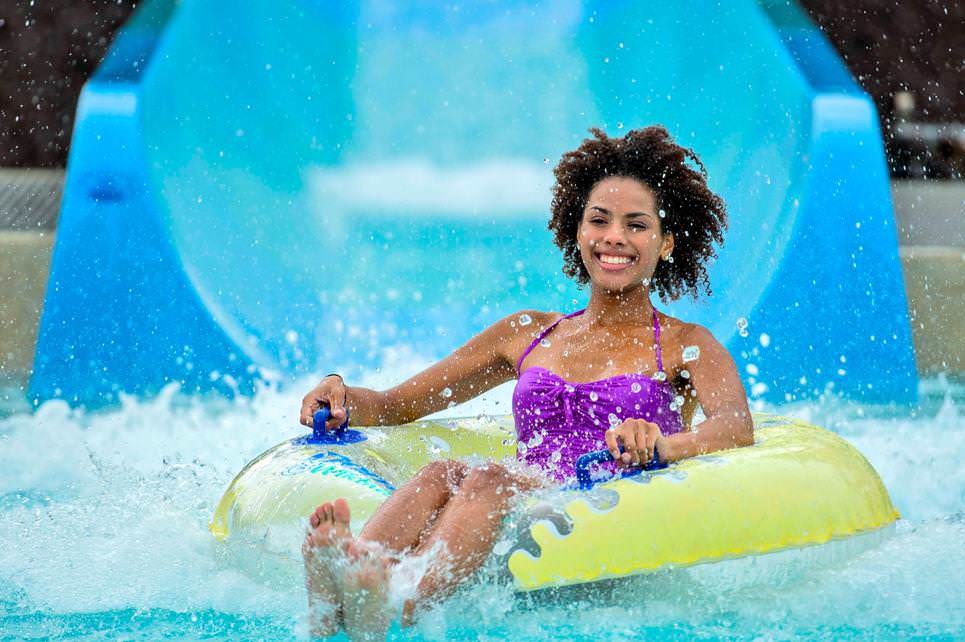 Opening its doors in 1981, Canada’s Wonderland’s first visitors were treated to the sight of 12,000 helium balloons, one for every guest, and 350 white doves released into the sky, with 13 parachutists and pipe bands serving as the park’s welcoming committee.

Canada’s Wonderland is divided into eight equally wondrous zones. Enter International Street and take a stroll along its many shops, restaurants and candy stores. International Street is home to the park’s crowning jewel, the Wonder Mountain. It is a monument of rocky mountains lined with waterfalls and turquoise pools, and houses Wonder Mountain’s Guardian, an interactive dark ride featuring 3D and 4D technology as well as exhilarating fantasy narratives you’d have to experience for yourself. Visitors will enjoy buying souvenirs, catching live shows or taking their first mandatory photographs.

Jump right into the action in Action Zone, home to several of the park’s many award-winning rides. Experience a thrilling car chase in Backlot Stunt Coaster or dare to ride the Behemoth, one of the park’s most famous rollercoasters. Visitors can choose to swing, spin and launch themselves (safely) through the air by riding WindSeeker, Sledge Hammer, Skyhawk and Psyclone. Ever wondered what it would be like to be a pebble fired from a slingshot? Hop onto SlingShot, a pay-per-use slingshot that launches its daring riders over 90 metres up in the air.

Travel back in time when you enter the Grande World Exposition of 1890 area of Canada’s Wonderland. Reminiscent of 19th-century world fairs, this area of the park is designed with Asian and African motifs. Hop aboard the Antique Carousel and ride any of its 64 vintage, hand-carved horses. Get your world turned upside down by getting on Flight Deck, Canada’s very first inverted roller coaster or feel what it’s like to fly with Time Warp, Canada’s first flying rollercoaster. Ever wondered what a free fall feels like? Experience it for up to four seconds on the Xtreme Skyflyer.

Cool down by getting wet in the Frontier Canada Area, the newest themed section of Canada’s Wonderland. Taking inspiration from the Klondike Gold Rush, Frontier Canada is home to many of the park’s water rides, as well as the Yukon Striker. Billed as the tallest, fastest, and longest dive coaster in the world, the Yukon Striker will take visitors for a dizzying spin, with four inversions and a 75 metre drop around a 1105 metre track at a whopping speed of 130 km per hour. Feel the need for more speed? Ride the Vortex, Canada’s first suspended rollercoaster, and also the fastest of its kind in the world. Want a calmer ride? Hop onto the Mighty Canadian Minebuster, one of the park’s first rollercoasters. Don’t mind being in the splash zone? Check out Timberwood Falls or White Water Canyon with its river rapids and waterfalls. Flying Canoes is an interactive family ride where riders can control their own flying canoes. Wind it all down by catching a movie at the Action Theatre, a motion simulator ride that lets viewers immerse their senses.

Get competitive in the International Festival area of the park. Designed like an alpine town, the International Festival is home to a number of midway games visitors can participate in and win prizes. Say goodbye to road rage with the Krachenwagen bumper cars. Take your geometry lessons further by riding the Shockwave, which spins its passengers around every possible angle. Love cheese? The International Festival area is home to the Alpen Cheesery with its gourmet mac 'n cheese. For a truly Canadian experience, visitors must visit Poutinerie. This restaurant specializes in poutine, a uniquely Canadian dish made with French fries, hot gravy and cheese curds.

Return to ye olde middle ages in the Medieval Faire, which is designed with a medieval European theme and uses pseudo-Elizabethan English in its main attractions. Visitors can play more midway games in this area of Canada’s Wonderland, and ride a variety of creature-themed roller coasters such as the Wilde Beast, Bat, Dragon Fyre, Wilde Knight Mares or the Leviathan, the tallest and fastest roller coaster in Canada. Racing enthusiasts will also delight in Medieval Faire’s Speed City Raceway, a pay-per-use go-kart racetrack.

Looking to cool down in the summer heat? Head over to Splash Works, an 8 hectare water park within Canada’s Wonderland. Open from May to early September, Splash Works is home to Whitewater Bay, Canada's largest outdoor wave pool.

Coming with small children? Tiny tots will enjoy KidZville and Planet Snoopy, two areas of Canada’s Wonderland created specifically for its much younger visitors. For the young and young-at-heart, Swan Lake at Planet Snoopy is a relaxing ride atop blue, pink or white swans. Adventurous tots can head to Maple Park Treehouse, a one-of-a-kind treehouse experience where they can slide, climb, run and explore the limits of their imaginations in this multi-level structure.

Explore More of Ontario Through Our Visitors

Tag your photos with #DiscoverON to inspire others.