BeaverTails are deep-fried dough pastries that are stretched to resemble the shape of a beaver’s tail. So don’t worry, no part of actual beavers are used! It is topped with either sweet or savory ingredients, but the classic BeaverTail is dipped in a combination of cinnamon and sugar.

The first permanent BeaverTails kiosk is located on 69 George Street at the historic Byward Market in Ottawa, but there are over 140 BeaverTail franchise and license locations all over the world. In Canada, BeaverTail chains can be found in Newfoundland and Labrador, the Maritimes, Ontario, Manitoba, Alberta, British Columbia, and Quebec. There are also BeaverTail chains in Mexico, France, the United Arab Emirates, South Korea and Japan.

For more information about BeaverTails and where to find them, we recommend that you go to their official website. Or keep reading for more info. 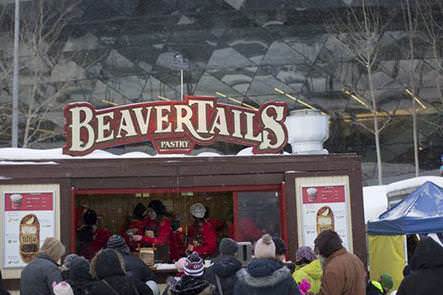 Created with whole wheat flour and fried to soft, crispy perfection, BeaverTails trace their origins from bannock, a non-rising dough stretched over two sticks that early settlers cooked over a fire, taking after how Indigenous people flame-cooked beaver tails to access the meat inside.

The BeaverTails we know and love today also originate from Küchle (pronounced keek-la), a Bavarian pastry that is made by pulling the dough into disc shapes, deep-fried, and then coated with cinnamon and powdered sugar. Grant and Pam Hooker, founders of BeaverTails, used a recipe for Küchle passed down from Grant’s German Canadian grandmother. But the iconic name for the pastries came from the founders’ daughter, who saw a resemblance between the flat pastries and the tail of Canada’s symbolic animal mascot.

The Hookers first started selling BeaverTails–then called Hooker’s All-Canadian BeaverTails–in 1978 at the Killaloe Craft and Community Fair in Ottawa. They then moved on to their flagship store at Byward Market in 1980 but skyrocketed into becoming a Canadian staple in the winter of 1981. Since then, BeaverTails has expanded into an international franchise, enjoyed by pastry lovers as far as Mexico and Japan.

While a classic BeaverTail is eaten piping hot with an elegant sprinkling of cinnamon sugar, various cities in Canada have their own favourite varieties.

Want to taste two quintessentially Canadian treats in a single bite? Grab the PouTail: this is the signature BeaverTail pastry acting as an edible base for a pile of french fries, cheese curds and gravy. There is even a special Obamatail created for the former U.S. President Barack Obama. The ObamaTail is a classic BeaverTail with cinnamon sugar, topped off with the letter “O” spelled out in chocolate and maple syrup. Besides also serving drinks like smoothies, hot cider and hot chocolate, BeaverTails also offers vegan-friendly menu options!